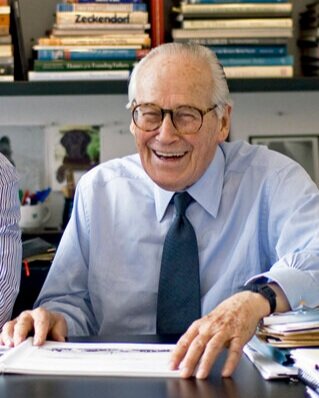 On May 9, 2020, at the age of 87, Jaquelin “Jaque” Taylor Robertson, FAIA passed away. Former dean of the School of Architecture at the University of Virginia, Jaquelin T. Robertson cofounded Cooper, Robertson & Partners in 1988 and has led the firm’s work on many award-winning designs. These include new communities in South Carolina, Florida and France; a sculpture garden in Kansas City; the College of Charleston; and Sony’s Imageworks headquarters in California. He also prepared master plans for Monticello and the Battlefield Museum at Gettysburg and has designed many award-winning private houses. Architectural Digest named Robertson one of "The AD 100," the magazine’s list of the top 100 architects and interior designers.

Founder of the New York City Urban Design Group and the first director of the Mayor's Office of Midtown Planning and Development, Robertson also spent three years directing the planning and design of Iran’s new capitol center, Shahestan Pahlavi. He received the Thomas Jefferson Foundation Medal in Architecture in 1998, the Seaside Institute Prize in 2002, and the Richard H. Driehaus Prize for Classical Architecture in 2007. The "Jaquelin T. Robertson Visiting Professorship in Architecture" at the University of Virginia School of Architecture is named in his honor. Robertson holds bachelor’s and master’s degrees from Yale University and was a Rhodes Scholar at Oxford University.