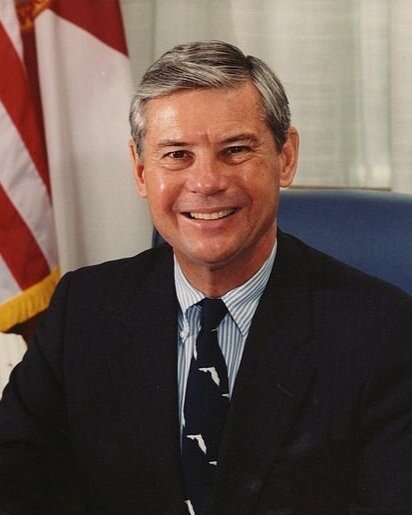 Senator Bob Graham is the former two–term governor of Florida and served for 18 years in the United States Senate. This is combined with 12 years in the Florida legislature for a total of 38 years of public service. Bob Graham retired from public service in January 2005, following his Presidential campaign in 2004.

Largely due to the efforts by Senator Bob Graham, Florida became a beacon for managing growth thoughtfully. The 1985 Growth Management Act helped slow overdevelopment of Florida's most critical environmental resources and forced local governments to think about how growth and infrastructure needed to be planned together. Due to its success, the act became a model for other states.

As Senator, Graham was the earliest proponent of an airport for northwest Florida, a project that many thought could help the area’s economy grow beyond tourism, fishing and pulpwood.

Bob Graham is recognized for his leadership on issues ranging from education, economic development, healthcare, environmental preservation and his service on the Senate Select Committee on Intelligence — including 18 months as chairman in 2001–2002. After retiring from public life, Senator Graham served for a year as a senior fellow at the Harvard Kennedy School of Government.

In May of 2010, Senator Graham was appointed by the President to serve as Co-Chair of the National Commission on the BP Deepwater Horizon Oil Spill and Offshore Drilling. This followed his service as a Commissioner on the Financial Crisis Inquiry Commission and as the Chairman of the Commission on the Prevention of Weapons of Mass Destruction Proliferation and Terrorism.

Currently he serves as chairman of the WMD Center, a 501c3 not for profit research organization which continues the work of the Commission. Senator Graham also serves as a member of the CIA External Advisory Board, as a member of the board of directors of several companies and as the chair of the Board of Overseers of the Bob Graham Center for Public Service at the University Florida.

Senator Graham is also the author of several books including “America: The Owner’s Manual,” which teaches the skills of civic participation, and “Keys to the Kingdom,” a novel of suspense which draws upon his background in government and intelligence.