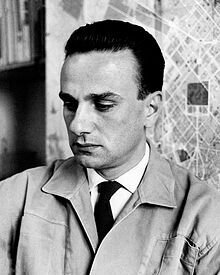 Italian architect Giancarlo De Carlo was part of the inner circle of Team 10, a group of mostly European architects who, in 1959, rose up in rebellion against the monolithic, absolutist and internationalist theories of modernist urbanism and established the beginnings of a profound reformist agenda against it. They collectively withdrew their membership from CIAM and began to advocate an approach to architecture and urbanism based on human immediacy, cultural specificity, and historical continuity. The architectural insight and projects of Team 10 made the work of Rossi, Stirling, Krier and many others of their generation possible. Eventually, the Congress of the New Urbanism was born in the United States, also owing a deep intellectual debt to polemical theories and group ethic of Team 10.

Through Team 10 and his writings, De Carlo argued for the necessity of applying architecture beyond the single building to the task of constructing and reconstructing cities. He advocated establishing a more tangible connection between architecture and nature. He elevated the humanity and logic of vernacular form and architectural typology into a championing of living cultures, the needs of real people, and the value of existing settings. He directed his leftist democratic commitments towards the practice of design as an empowering process of public participation. These were then, as they are still now, timeless, radical propositions.

In the mid 1970s De Carlo started two new platforms for architectural discourse, the bilingual journal Spazio e Società (1978–2000), and the International Laboratory of Architecture and Urban Design (ILAUD, 1974–2004). The issues dealt with by ILAUD were also those elaborated by De Carlo within Team 10, particularly the reading of context, history and territory as well as social issues such as participation and reuse of historic sites and buildings. The same issues were taken up by Spazio e Società, edited by De Carlo and his wife Gulliana Baracco.

Next to his teachings at ILAUD, De Carlo also taught at the Venice School of Architecture and was a guest lecturer at many international schools including Yale University, MIT, UCLA and Cornell University. His writings include early books on Le Corbusier and William Morris; publications of his work and ideas include: La piramide rovesciata, An Architecture of Participation, Gli spiriti dell’architettura and Giancarlo De Carlo: Immagini e frammenti.

His many projects located mostly throughout Italy, in Venice, Siena, Urbino, Catania, breathe the morphology of these beloved cities while revealing the creative mind of the thinking, probing architect. In December 1989 he was named an honorary citizen of Urbino and in 1994, 30 years after working on its first one, he drew up the town’s new master plan. In 1993 he received the RIBA Royal Gold Medal, followed by numerous other Italian and international honorary doctorates.